It’s the time of year when Christmas ads dominate the airwaves, filling our screens with bright colors and glittering objects as they urge us into the spirit of giving.

Many of those ads are huge undertakings, the culmination of extensive planning and financial investments, as they seek to capture our attention—and our hard-earned dollars (or pounds). In fact, Christmas ads are some of the most complex and costly spots to produce each year, often comparable to those produced for tentpole events like the Super Bowl.

In this installment of Made in Frame, we have the pleasure of talking to the talented team at Untold Studios, the first entirely cloud-based creative studio. They’ve recently completed work on this year’s John Lewis/Waitrose & Partners Christmas ad, which features Excitable Edgar, the adorable CG dragon whose enthusiasm wreaks unintended havoc wherever he goes.

A major undertaking involving numerous production entities, it’s a mini Christmas movie and a mega Super Bowl ad all wrapped up in a package that’s a feel-good feast for the eyes.

For those of you on the US side of the pond, John Lewis & Partners is a UK-based upscale department store chain, with Waitrose & Partners as their supermarket adjunct. Their Christmas ads are an eagerly anticipated event each year, with this one already garnering over nine million views on YouTube alone since its debut in November.

That London-based creative studio Untold Studios—formed just a little over a year ago—landed this spot speaks volumes to the agency team at adam&eveDDB’s confidence in their ability to deliver something special and unique. 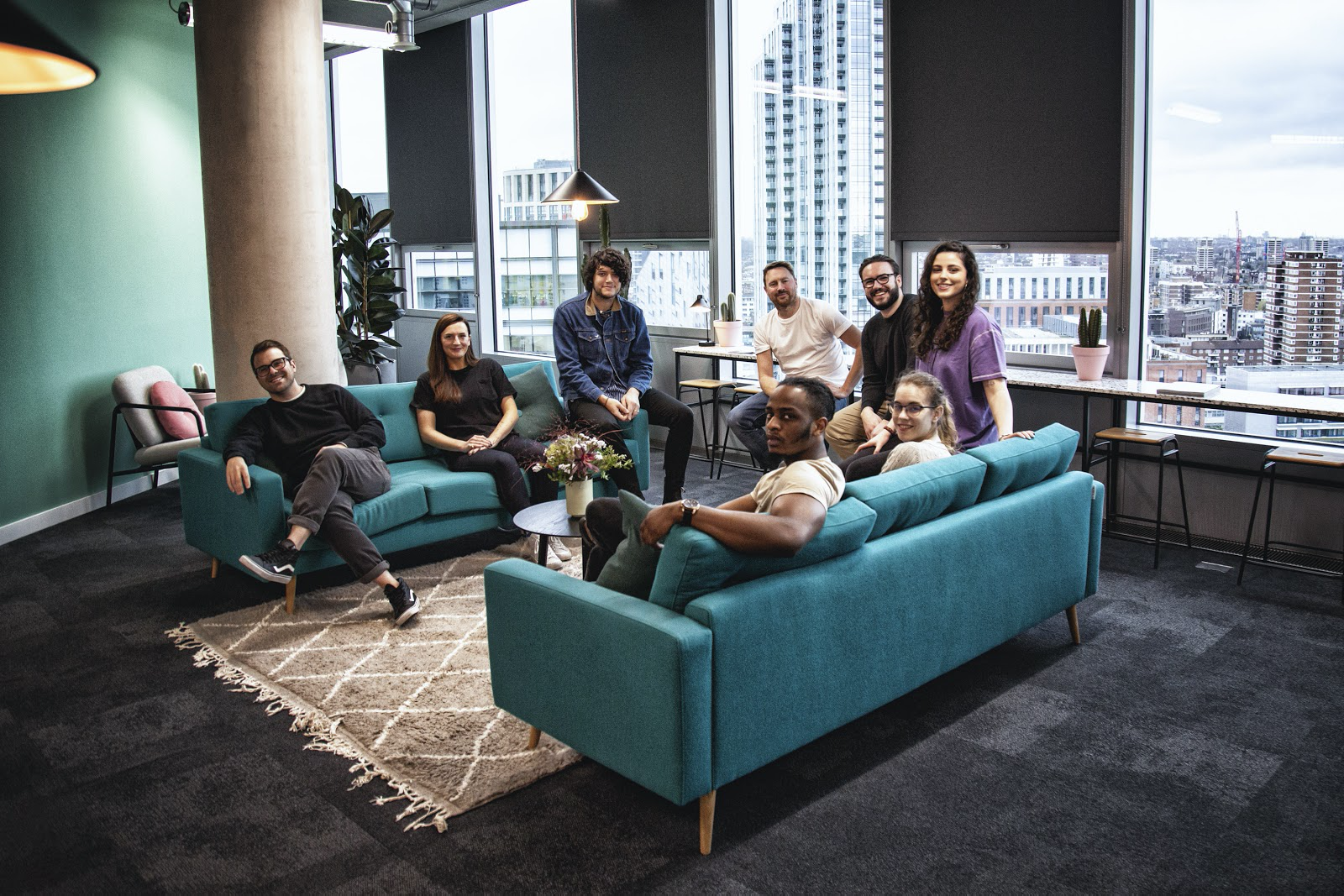 All of that to say that there were numerous production entities and stakeholders needing to access and share assets, and to view the many iterations of designs and work-in-progress throughout the production process.

Reaching to the cloud

When Untold Studios conceived their studio workflow, they looked to the cloud. According to CEO Darren O’Kelly, “Untold Studios is built for the future. The worlds of advertising, entertainment, and technology are intersecting like never before. 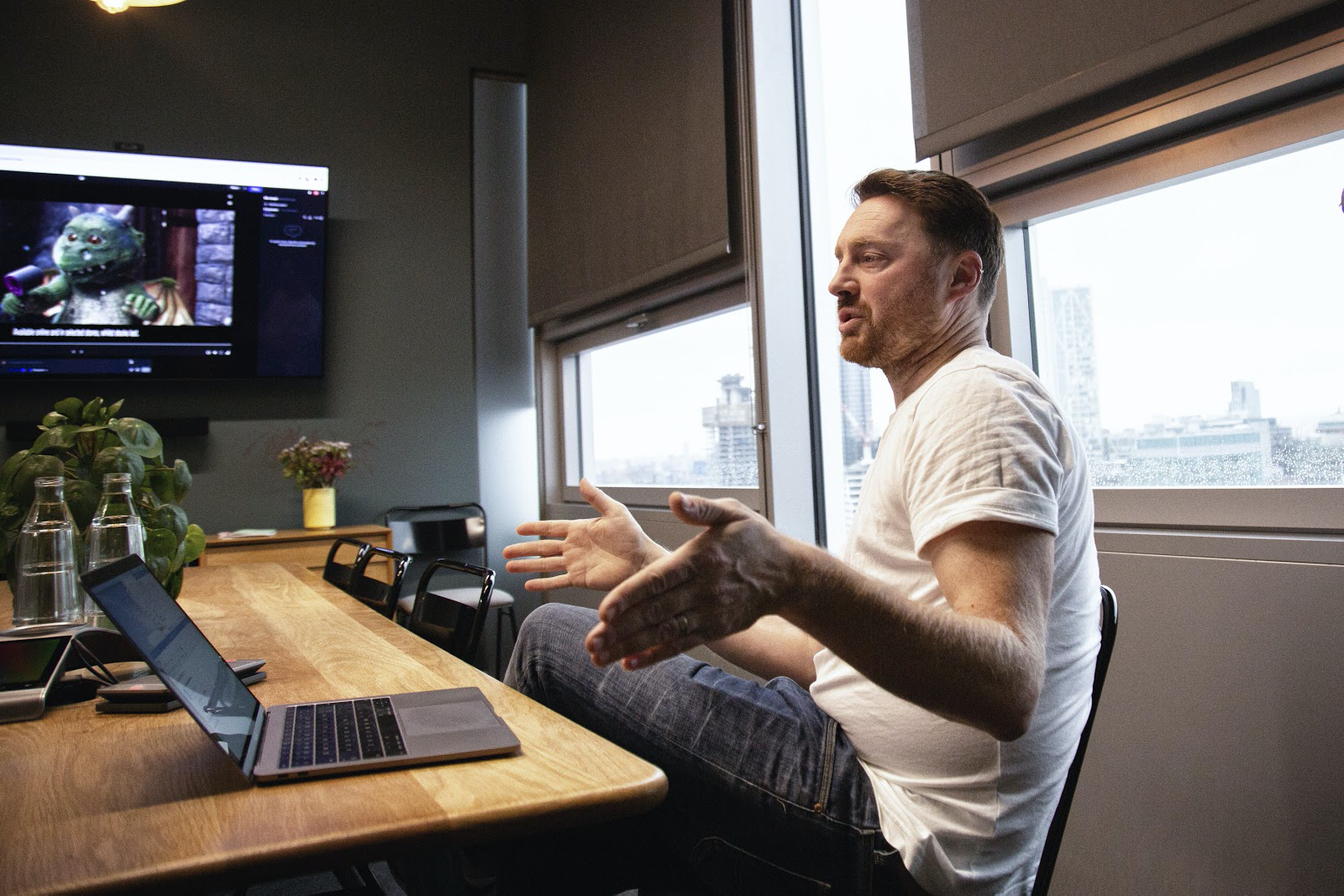 Untold Studios’ workflow is constructed atop a next-generation technology digital infrastructure. “This cloud-based approach has freed us from the constraints that limit creative potential; it facilitates a borderless workflow, to access content from any location, allowing us to employ the best creative talent anywhere in the world,” O’Kelly says

Amazon Web Services (AWS) has built an Untold Studios laboratory in London that provides hardware, processing, and rendering capabilities that are highly secure and live in an MPAA-approved environment, creating a workflow that is both flexible and scalable. 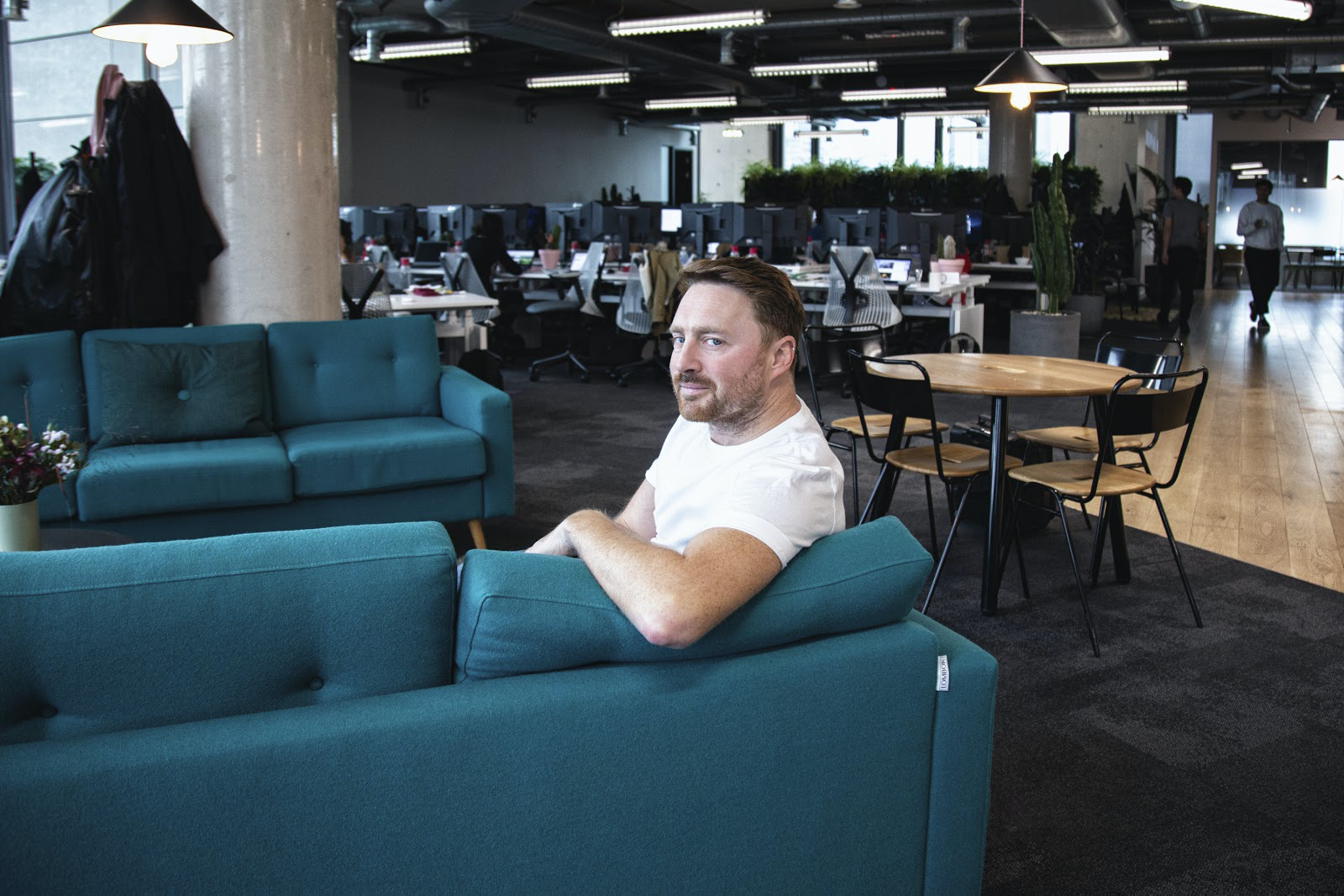 Untold Studios London laboratory was build by AWS to test the power and flexibility of a cloud-based workflow.

If any of that rings familiar, it’s because the Frame.io platform is likewise built on AWS, with best-in-class security, scalability, and flexibility at the core of our business model. So it’s no wonder that Untold Studios uses Frame.io as an essential part of their cloud-based workflow. 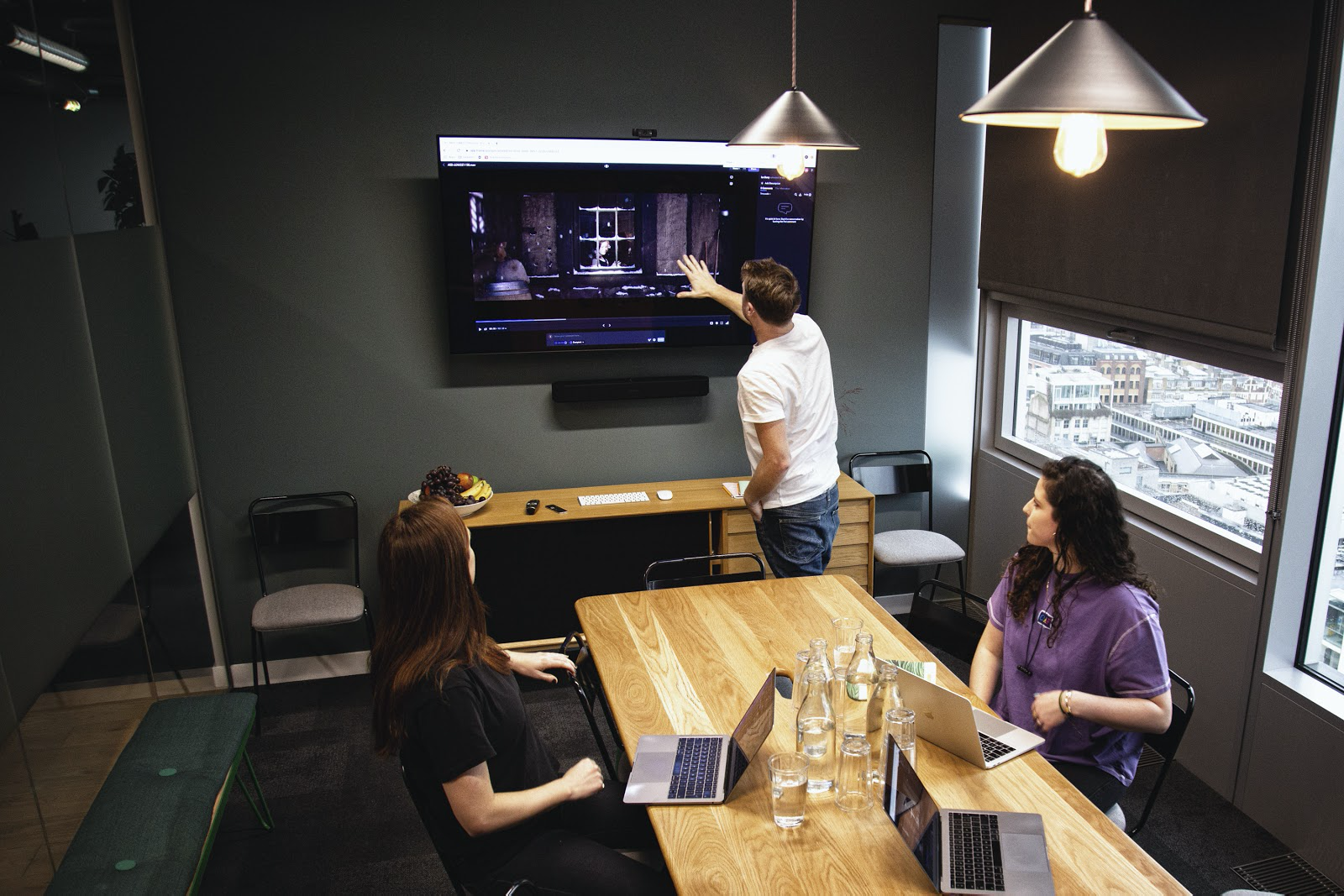 With an international crew of more than 85 people and a slate of scripted and unscripted original projects in development, being able to access talent, irrespective of location, is key to Untold Studios’ success.

The Excitable Edgar project is a prime example of how Frame.io helped enable a workflow of that scale and scope. Begun in May of 2019 for a November 13 debut, the team of 40-plus artists created more than 100 shots featuring Edgar across the various deliverables, including the main two-and-a-half minute spot.

Tom Walter, Head of Operations, EP Ian Berry, and Head of IO Nathan Wilson walked us through the lengthy and labor-intensive project from conception to delivery.

Led by Creative Director Diarmid Harrison Murray, the first step was designing and developing Edgar. Despite using the highest-tech workflow available, nothing substituted for beginning with good, old-fashioned pencil drawings for exploring Edgar’s character, a young dragon with puppy-like enthusiasm that manifests itself in his inability to control his fire-breathing excitement. 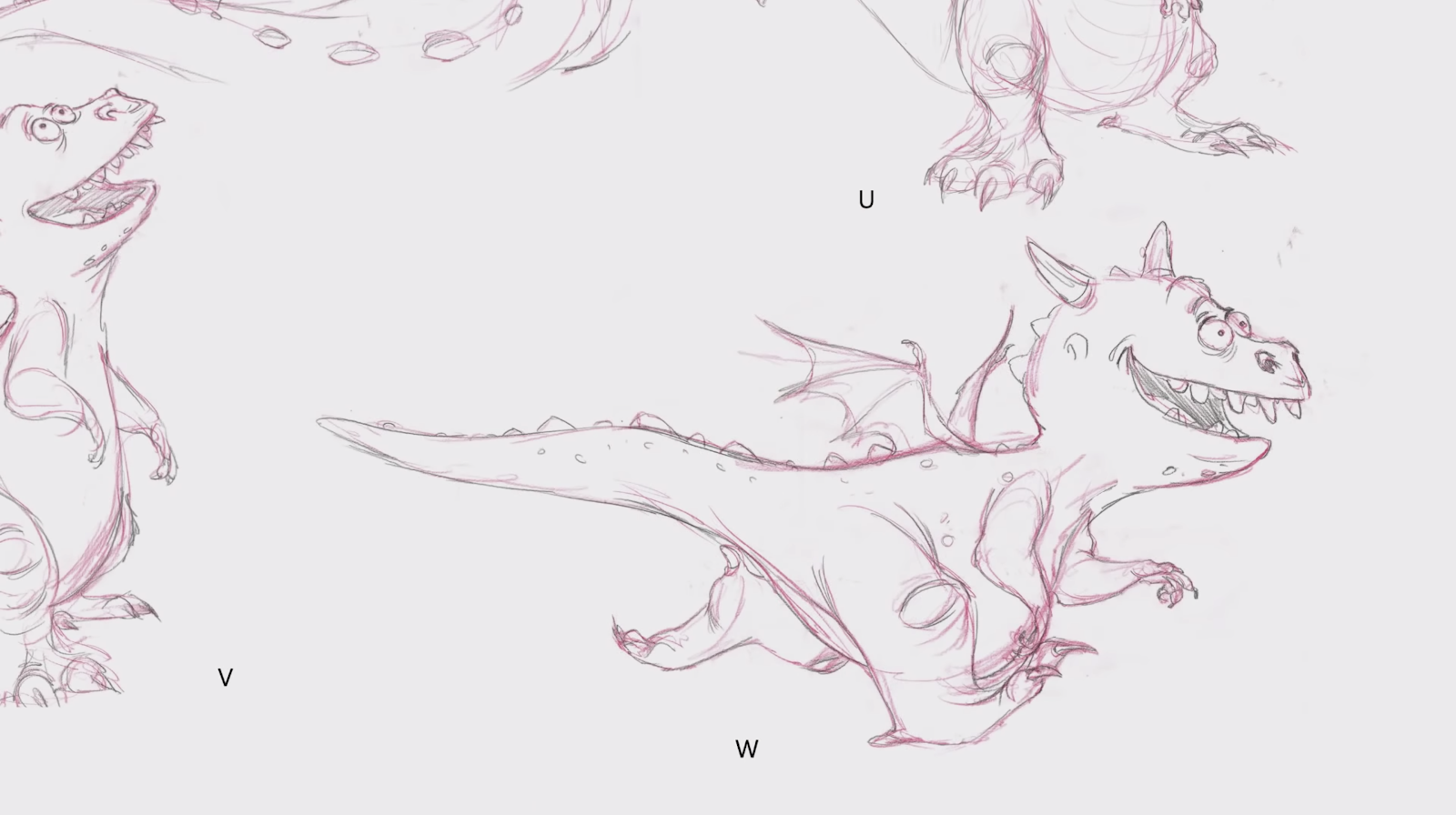 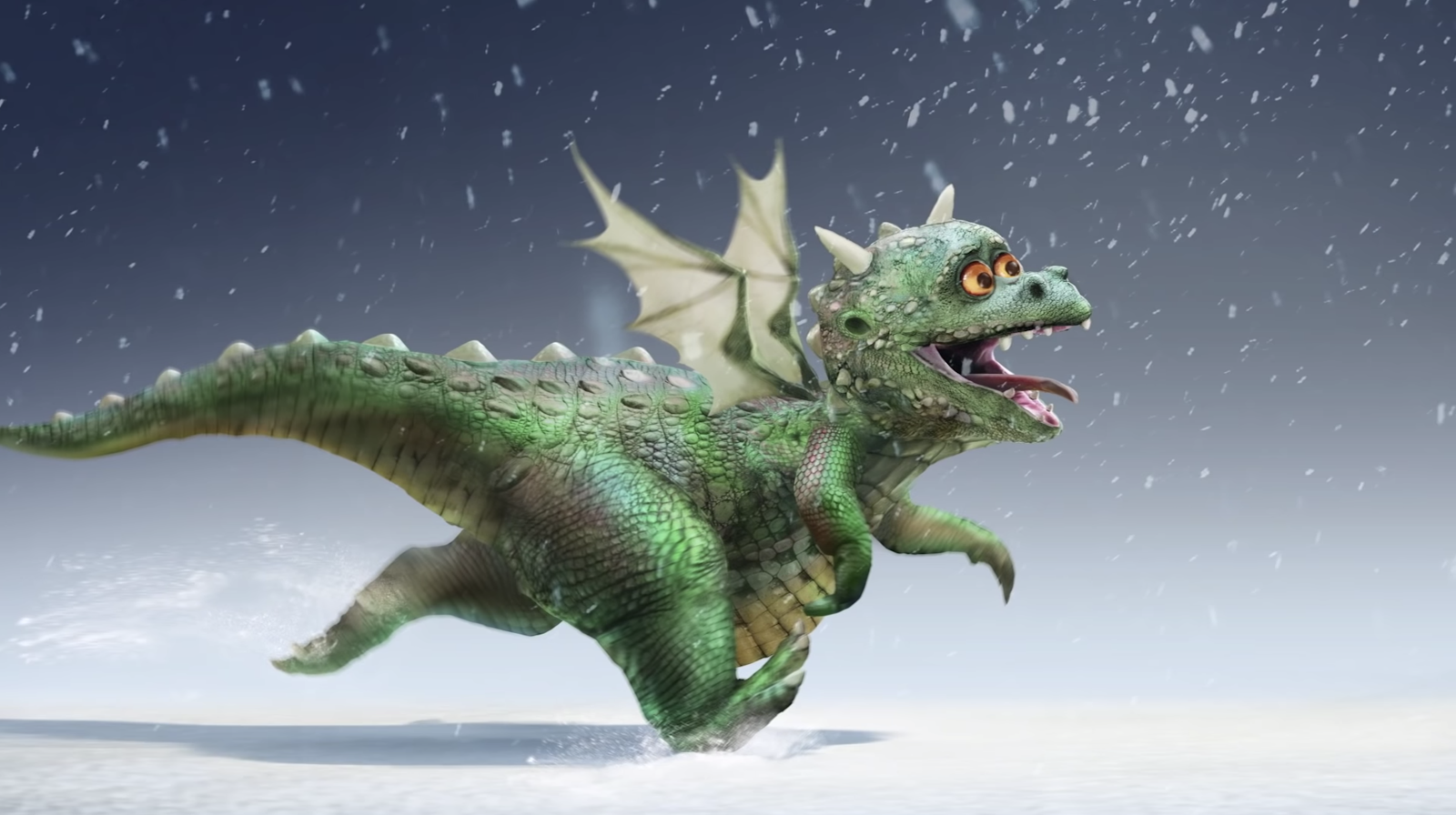 One of the team’s early challenges was finding the balance between his cuteness and dragon-ness. “Edgar is still a baby in dragon years, which is evident from his baby fat, mismatched horns, and toddler-like waddle,” Ian explains. “But once he gets excited about something, he can also pick up speed on all fours.” 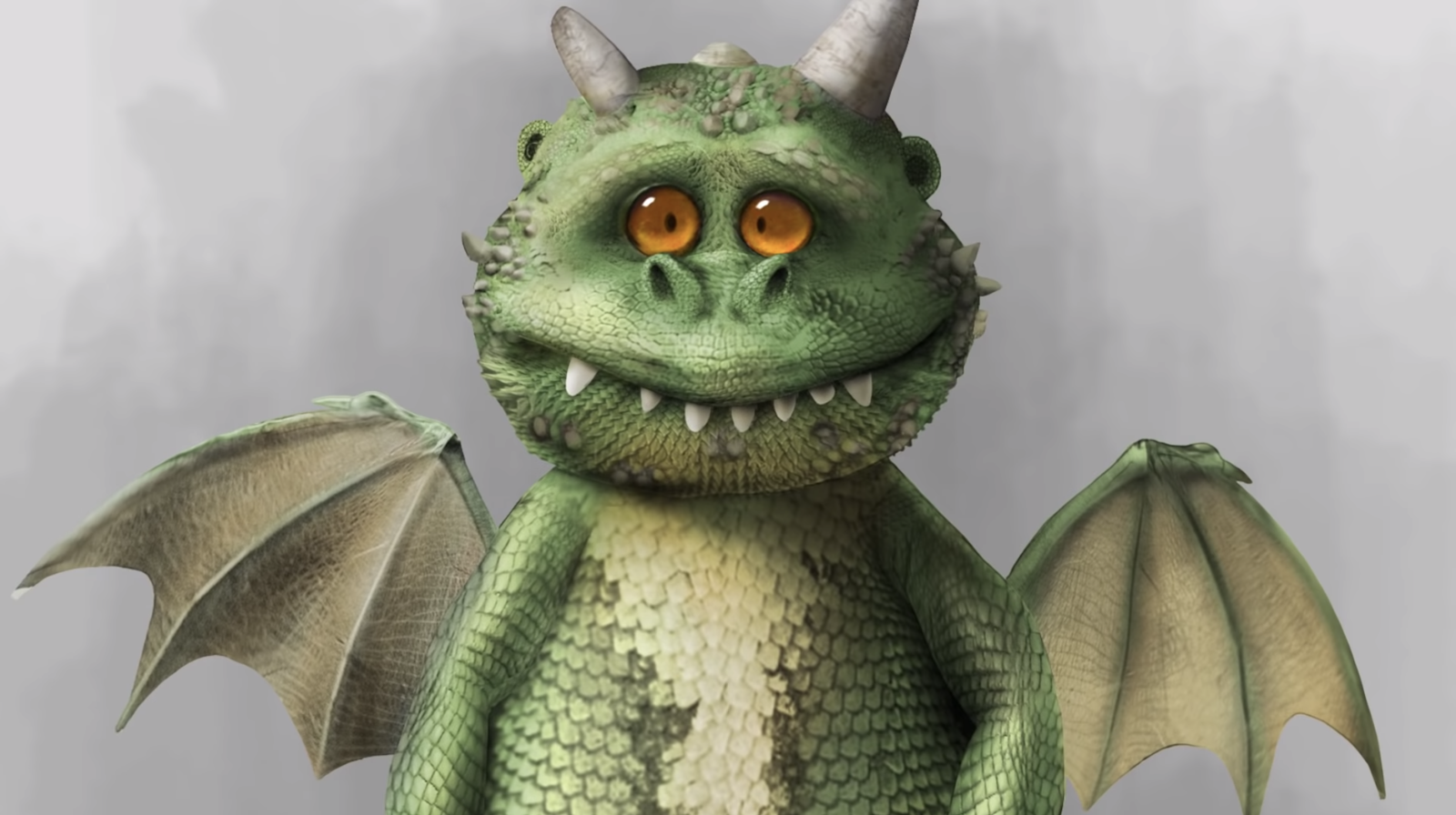 The team researched and referenced creatures that exist in the real world to design everything from Edgar’s skin and scales to his eyes.

“Using Substance and Mari, we created his skin and scales with a semi-procedurally created groom from individual scales rather than using a displacement map that visibly stretches,” Ian says. “A bespoke, fully-fledged rig with muscles, fat, and skin dynamics made sure Edgar felt as natural as possible in the otherwise realistic setting, while still maintaining his cute, wobbly look.” 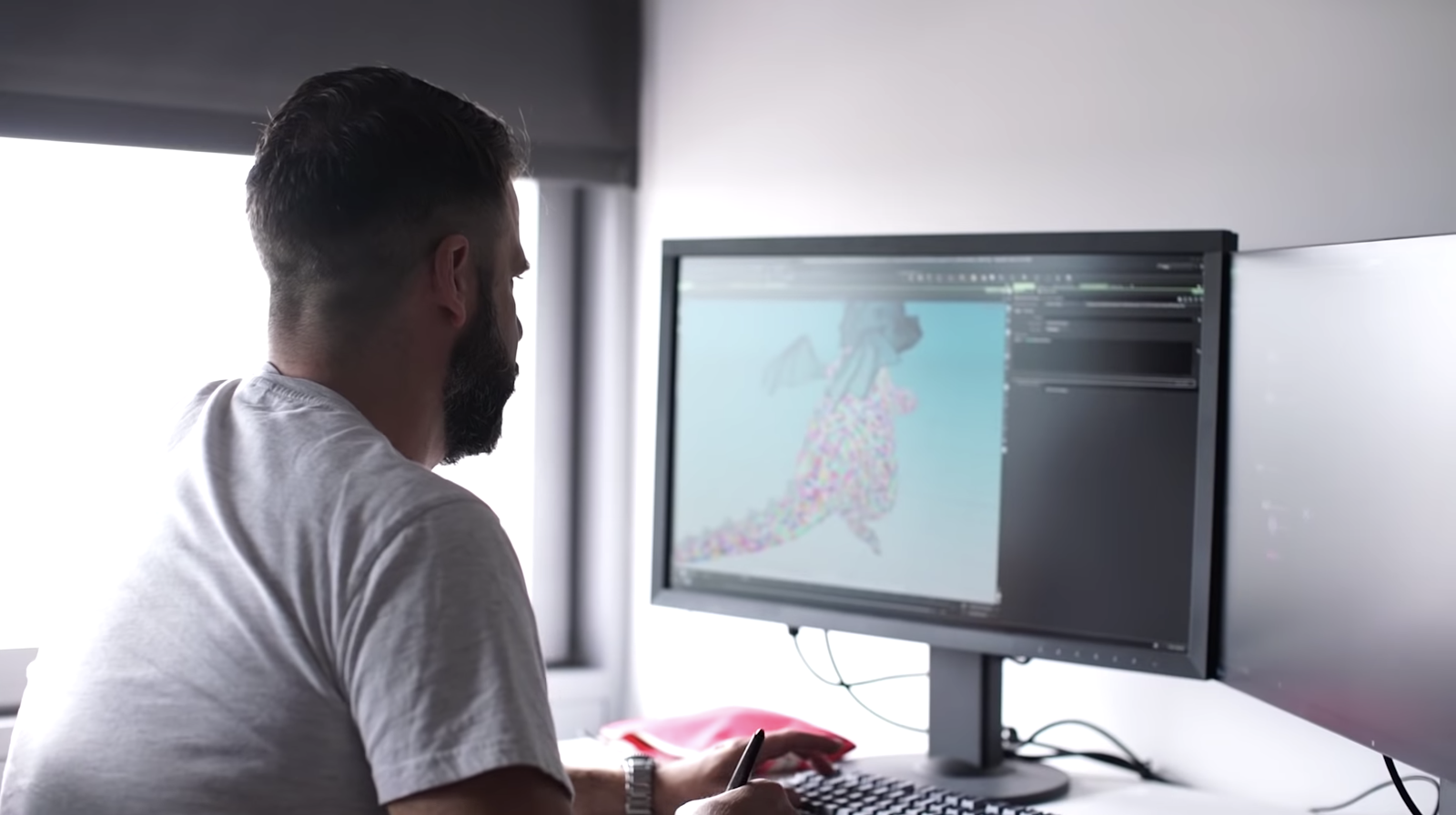 Of particular note are Edgar’s large, melting eyes, which speak emotional volumes in key scenes with his human BFF, Ava.

“Again, we examined various creatures and landed on making his eyes somewhere between a lizard’s and those of a slow loris. We created fibrovascular tissue for the irises, enabling us to capture minute details in even the most extreme close-ups.”

A May to November production schedule may seem lengthy for a commercial, but given the quantity of work, efficiency and organization were essential.

“Once we had designed Edgar, the next task was bringing him to life on screen,” Ian says. “Using Maya and Zbrush, Edgar’s face was sculpted and then rigged, allowing us to first test key poses, which then gave us the main expressions and emotions we wanted to achieve.” 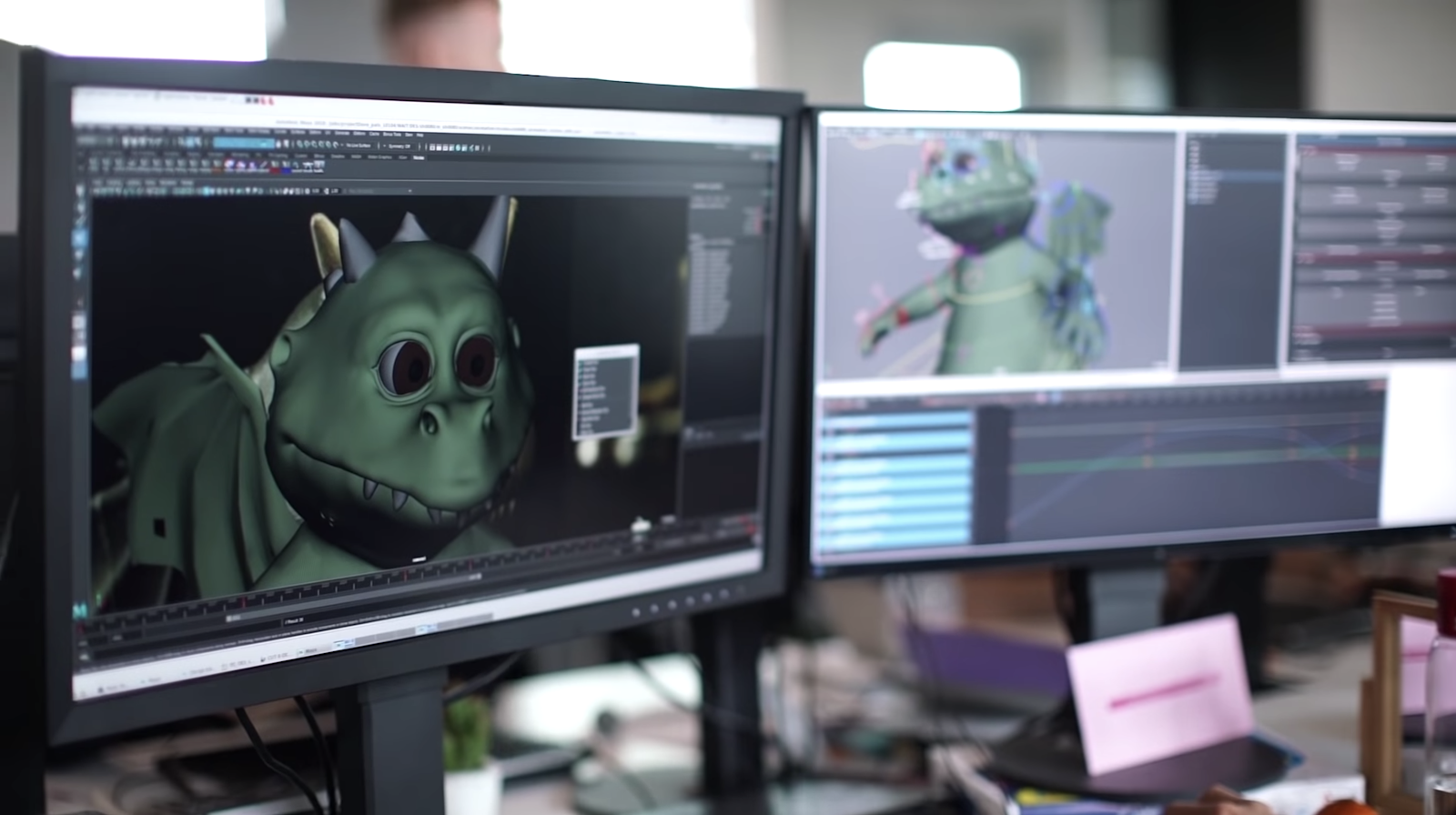 The eyes, eyebrows, and other key features were all rigged specifically, and often adapted to achieve a particular emotion or expression. 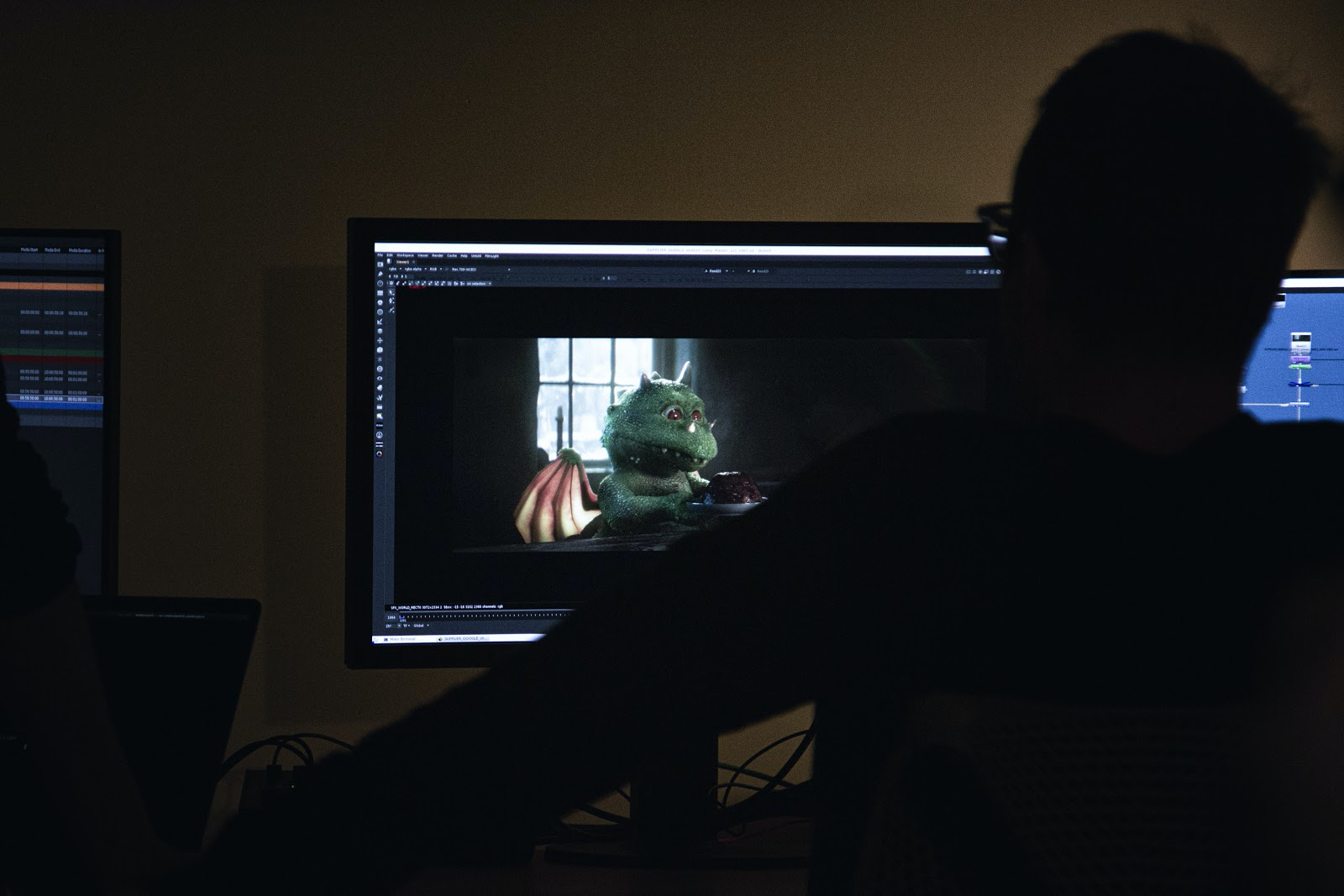 Throughout a process as laborious as this, it’s vital for the team to be able to communicate quickly and unambiguously with all the stakeholders involved. “Frame.io was key in allowing us to quickly share our work-in-progress updates, facilitating communication and collaboration both within our team and with the client and agency,” Tom explains. 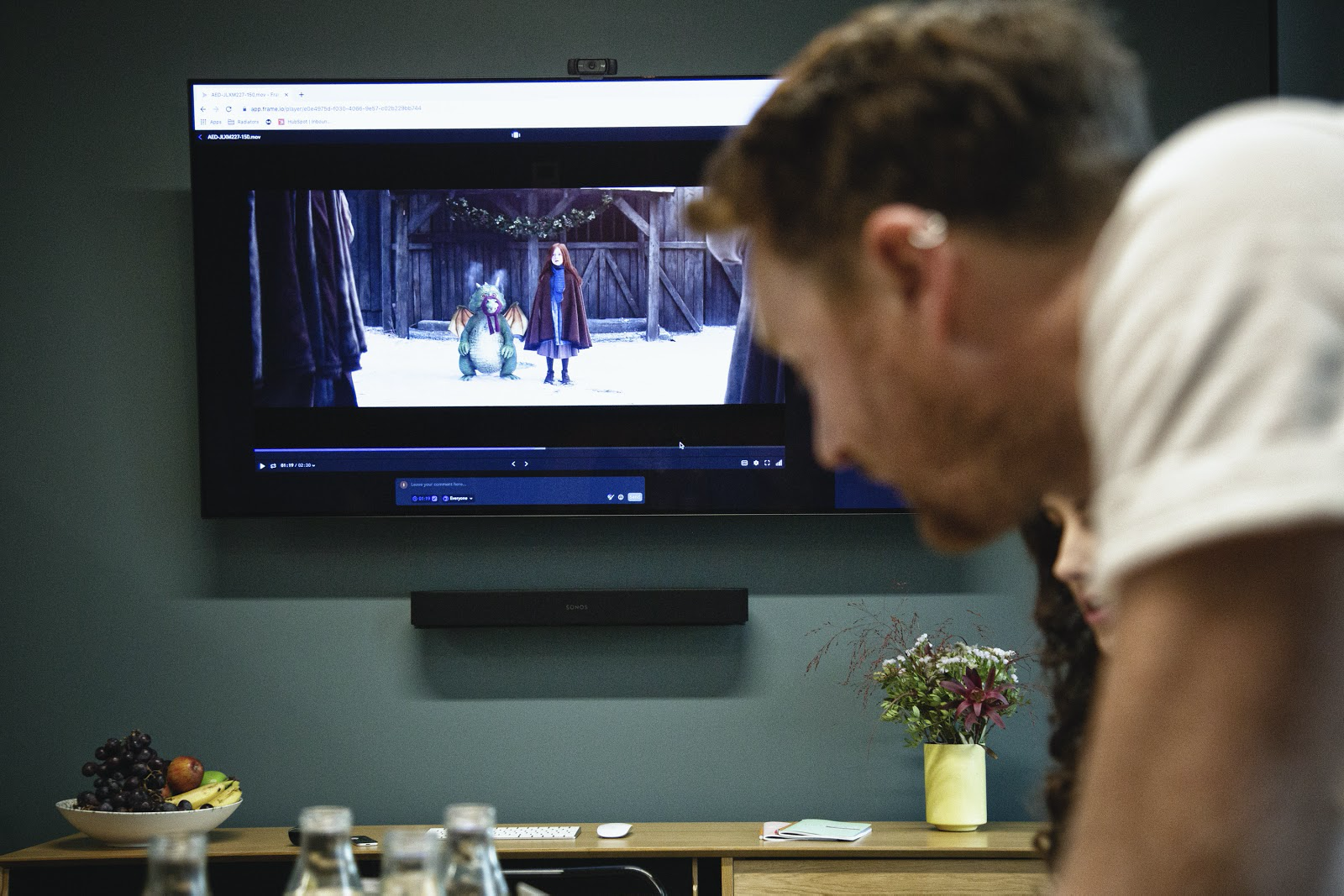 “We were able to have a number of key artists working remotely, sometimes in different parts of the world, using our cloud-based system. Frame.io helped us to keep them informed and up to date through ease of uploading and sharing.”

The shoot, helmed by acclaimed Blink director Dougal Wilson (a veteran of John Lewis Christmas spots), took place in Budapest over the summer. Wilson chose to shoot with an ARRI 435 on film as a way of ensuring that the beautiful village appeared as richly idyllic and magical as possible. 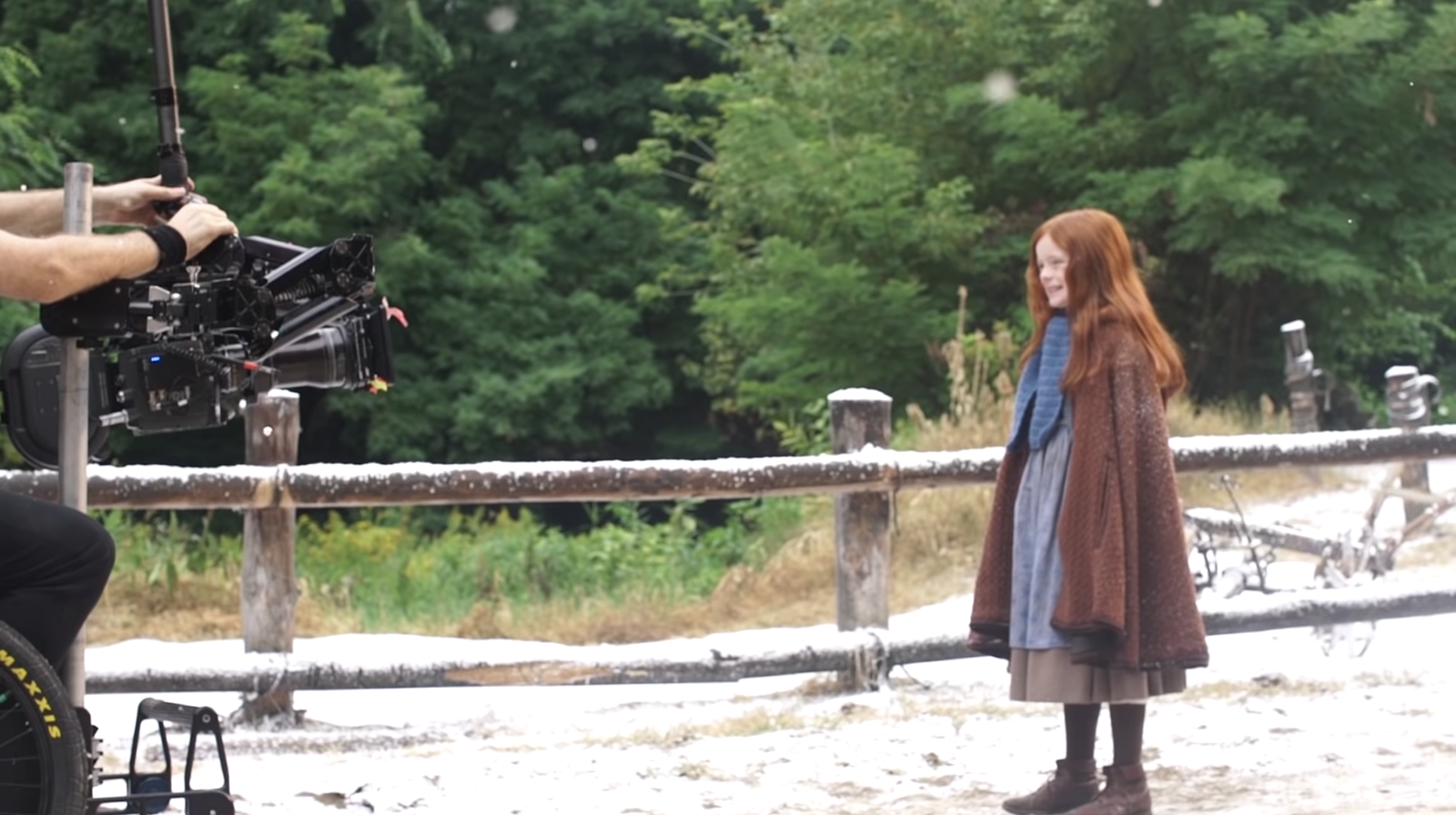 Untold Studios sent their VFX supervisors to the shoot to record lens and camera information, take measurements and data, and generally ensure that all elements were shot to their specifications in order to properly incorporate the CG character into the live action seamlessly. 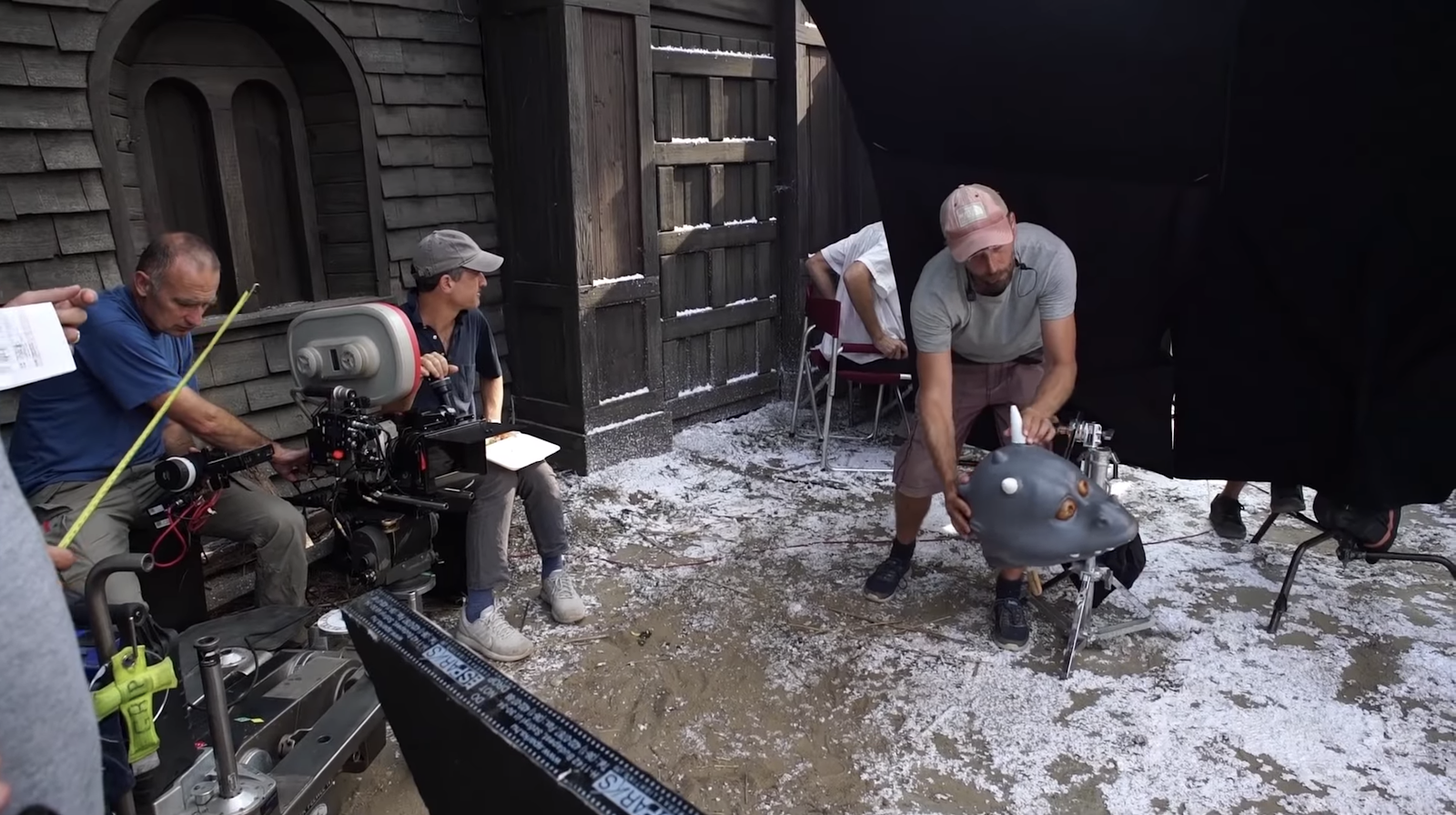 Cinelab handled the scanning process, creating 4K DPX scans (4096×3112).This allowed Untold Studios to downscale the footage to the appropriate frame size for different stages of VFX production, using DaVinci Resolve to go from ADX10 DPX to ACEScg EXR—because ACES is Untold’s primary color space. They worked at 2K (2048×1319) for the majority of shots, but for shots with intricate details and compositing they used 3K (3072×2334) files.

The animation process began in earnest once the live action was completed. Edgar was primarily animated in Maya, while character effects and effects animation were done using Houdini. 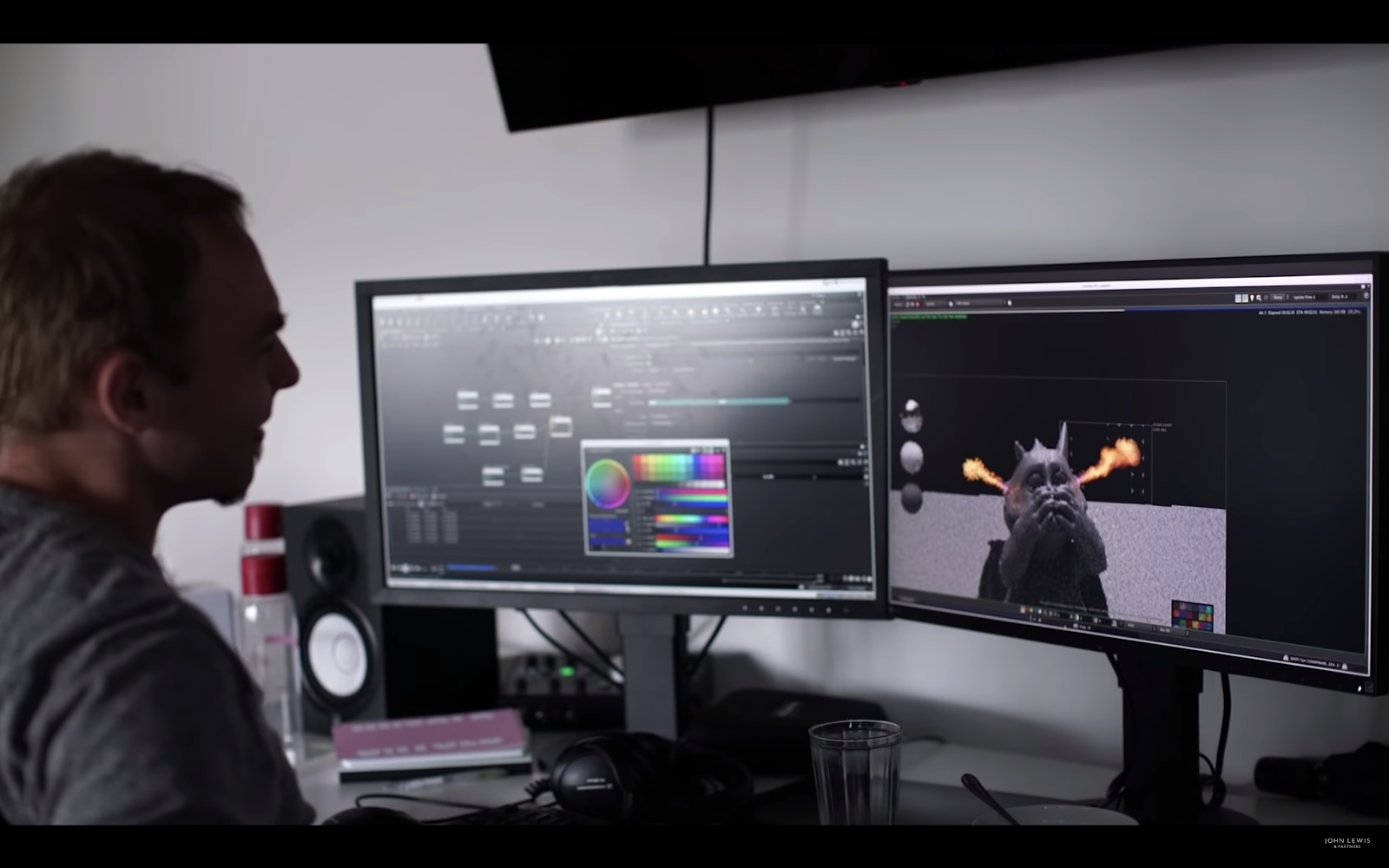 In terms of the animation style, Edgar displays a wide and extremely authentic range of emotions. “By keeping his movements subtler and more realistic, he conveys nervousness, disappointment, hope, or worry,” Ian says. “But for contrast, we slightly pushed the boundaries of realism to show his excitement. This contrast and emotional range is key to establishing his ability to control himself in the final scene, the crescendo of the film.”

For post-production, Cinelab supplied the ProRes proxy files of the scans to Final Cut and the edit was done at 1920×1080. Throughout post, Untold Studios used Frame.io to exchange rough compositions and WIP files with Final Cut so that they could incorporate basic VFX elements, including some early versions of Edgar, into the offline edit. Offline references and EDLs were then sent back to Untold Studios so they had exact shot durations for all of the animation and VFX scenes, and could view the VFX in context. 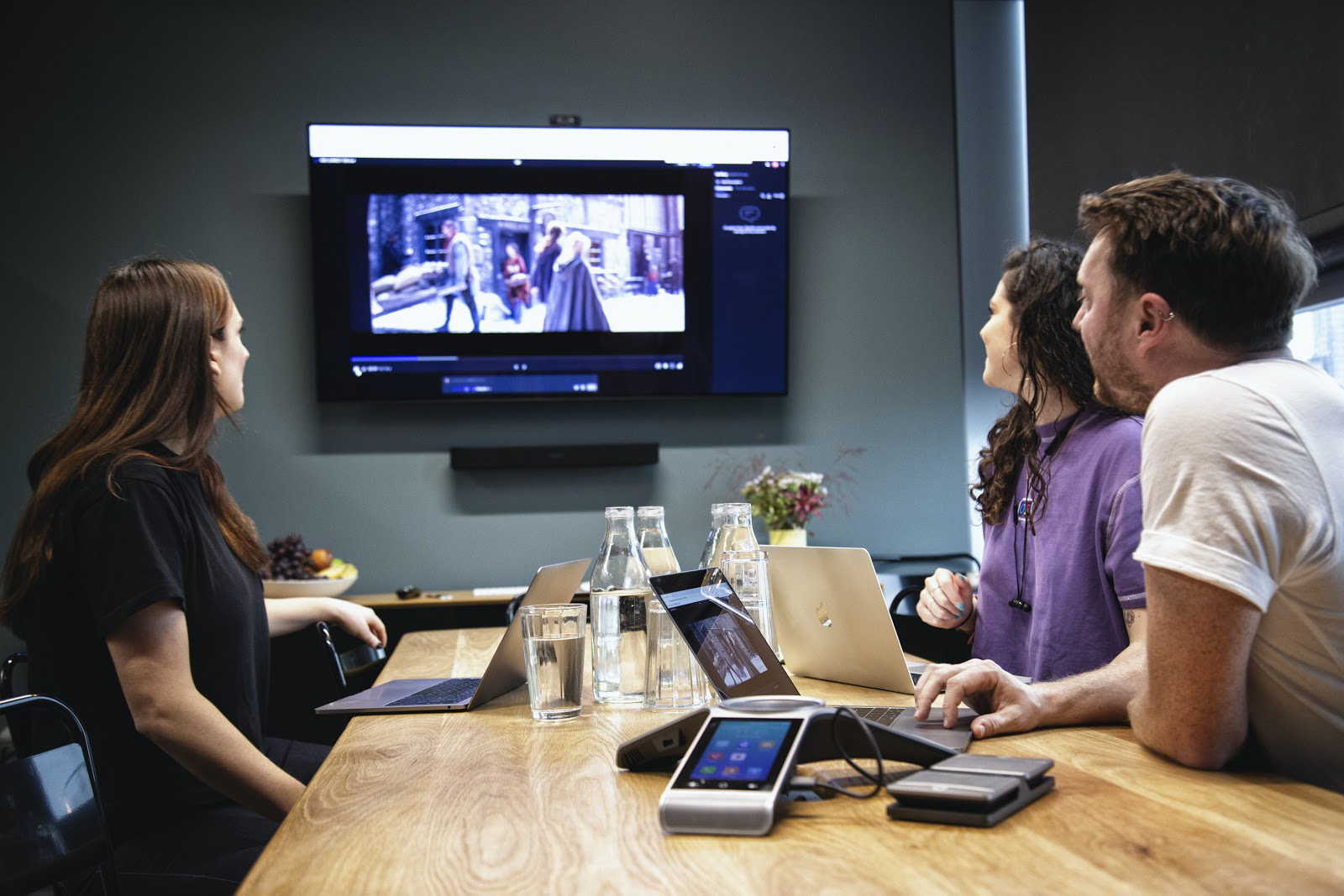 All CG rendering was done in the cloud, using Houdini and Arnold. “Cloud rendering is fundamentally scalable, so we are able to expand to a very large amount of render nodes when we need the power, and when rendering has been completed the render fleet returns to zero. This flexibility allows us to scale and render quickly and to manage our costs,” Nathan explains.

“Using cloud computing for rendering, storage, and our workstations gives Untold Studios the benefit of the solid reliability of the latest hardware with no hardware maintenance. And using the same cloud provider for our storage keeps our data traffic lighting fast.”

Untold Studios used Nuke and Flame for all the final compositing, fine-tuning each shot to ensure that Edgar was as “realistic” as possible. As is the case with any project of this scope, dropping completed (or nearly complete shots) into the cut means that versions are continually updated, requiring quick feedback in the event adjustments need to be made or approvals given. 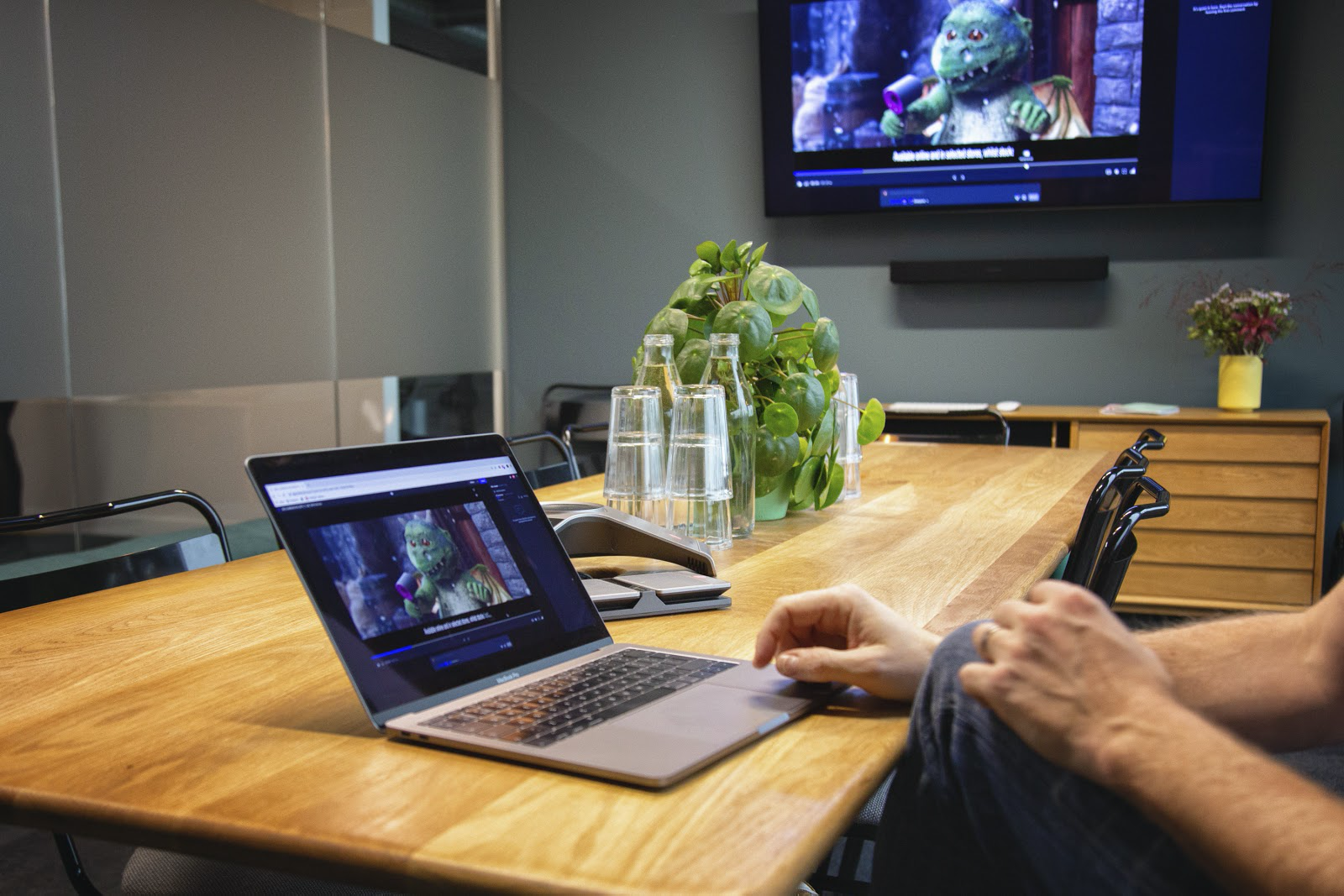 “Frame.io allowed us to share reviews and WIP quickly and efficiently during the short time period, with a simple and intuitive interface that facilitated a fast turnaround,” Tom says. “It also gave us the ability to add, remove, and alter links at any point, even after they had been sent. This meant we could swap out versions, passphrase protect, and turn downloads on and off after sharing.”

For the large deliveries of raw scans, ungraded sequences, and returning graded shots back and forth from MPC, they used Signiant’s Media Shuttle, which directly connects to Untold Studio’s cloud storage, a process they’ve automated to remove any manual handling of incoming and outgoing files.

With a variety of requirements for numerous broadcasters, platforms, and cinema distributors, Untold Studios used downloadable Frame.io links to upload and share deliverables. The final conform was done on Flame at 1920×1080 for broadcast, VOD, cinema, and online (YouTube, social media platforms, etc.), as well as in various custom frame sizes for DOOH (digital out-of-home) display screens.

Nathan adds, “We used Frame.io from day one of this project, starting out with sharing initial character sketches and moving onto storyboards and animatics. We shared these with our clients using password-protected presentation links. This continued as we started to create work-in-progress files of our character, environment, and FX builds. And all of our content sharing with adam&eveDDB was done with Frame.io.” 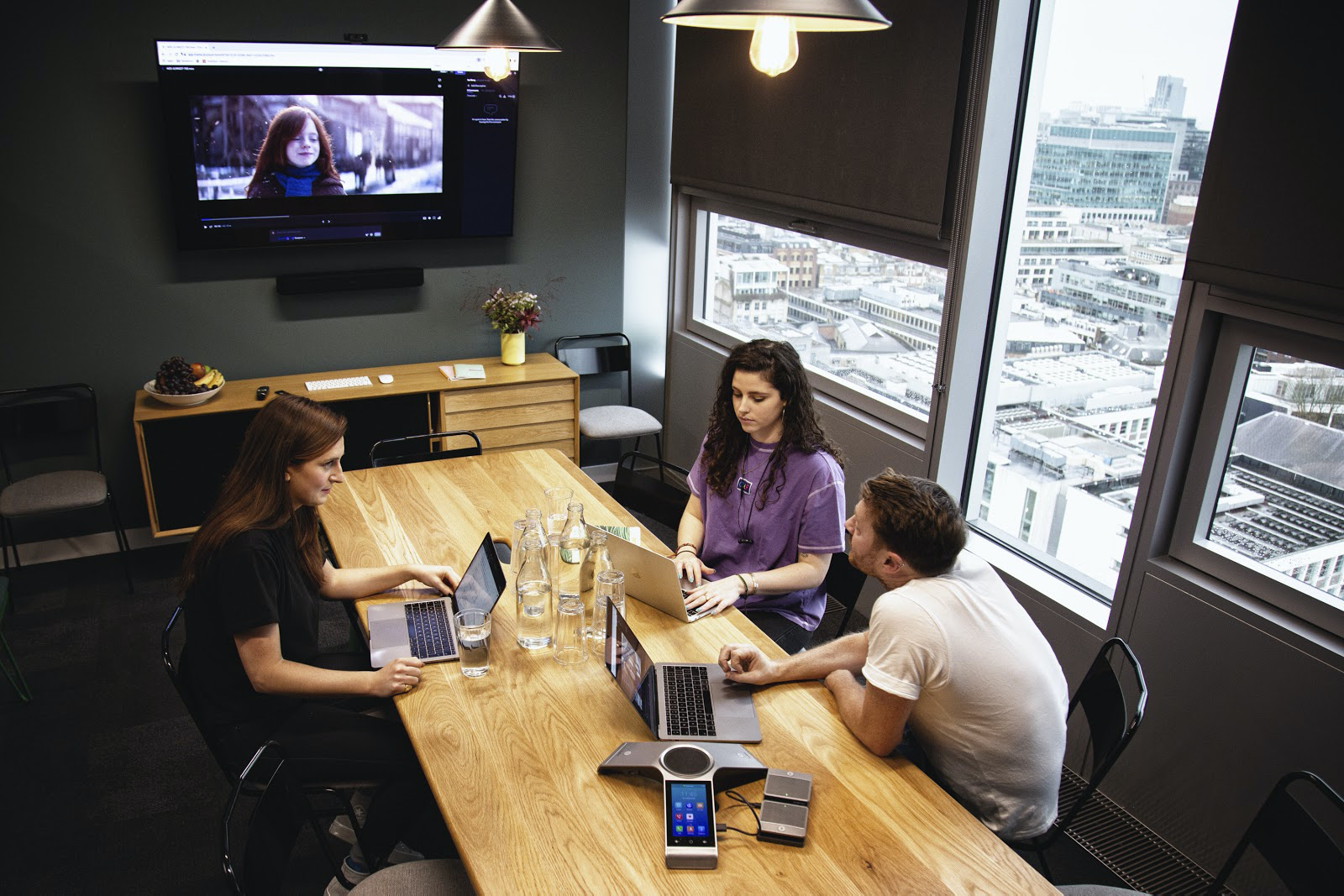 A labor of love

Yes, the production was complex and the technology as cutting-edge as it gets. But Untold Studio’s ethos is focused less on the technology for its own sake and more in support of their creativity.

As a studio whose shared vision is to be “the world’s leading content creative studio, we believe that technology is at the heart of creating extraordinary content,” Tom says. “We’ve deployed next-generation technology throughout our workflows to create transformational experiences where content can be personalized in order to make unique connections with the audience.”

If the number of views and the quantity of Edgar-branded merchandise sold through John Lewis and Waitrose are any indication, the creative mission was accomplished. Audiences connected with Edgar, inviting him into their hearts and their homes.

“We love Edgar,” Ian says. “He was a wonderful character to bring to life.” 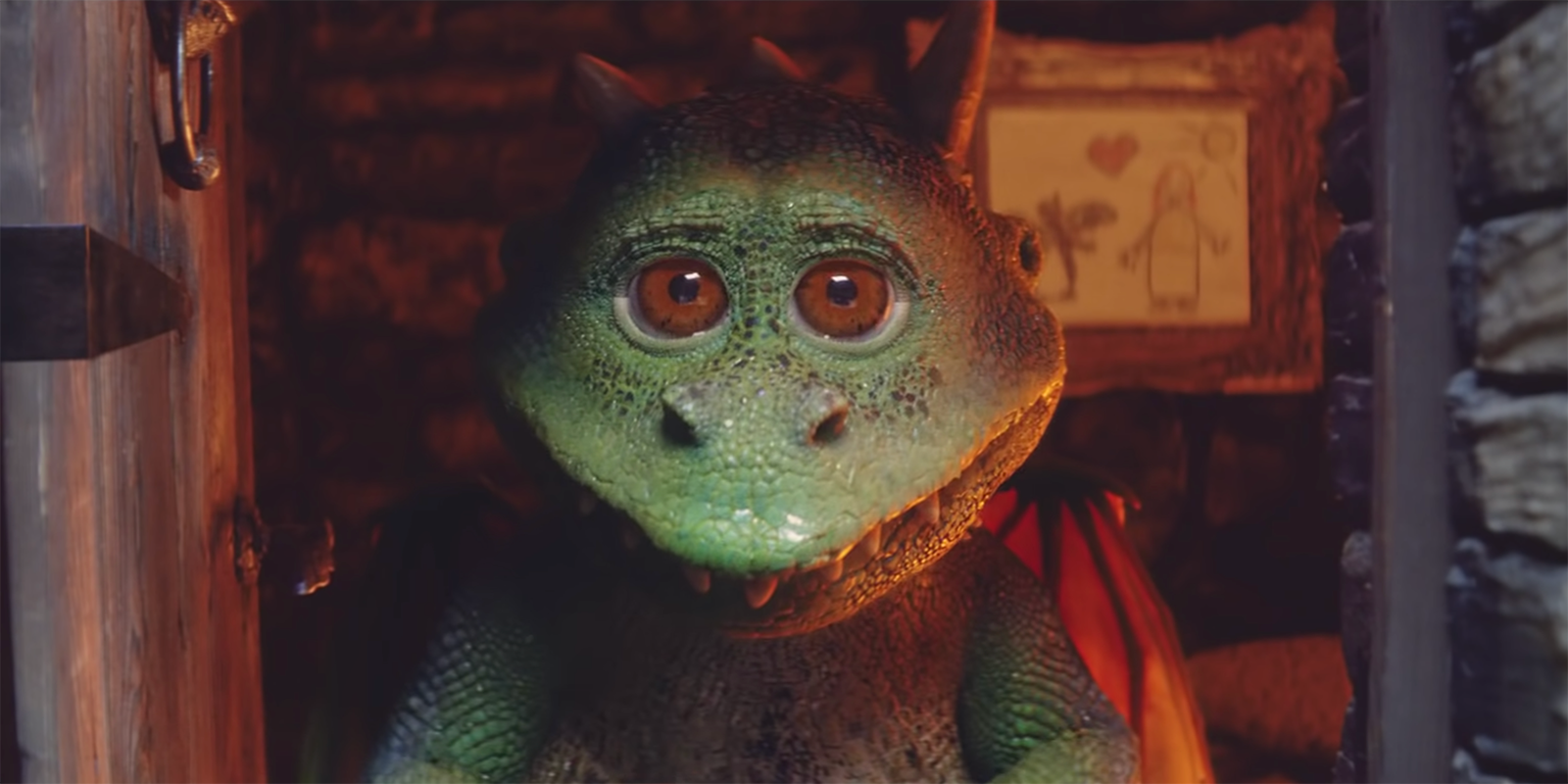 And we at Frame.io love contributing to successful productions, and look forward to seeing what Untold Studios has in store for 2020.